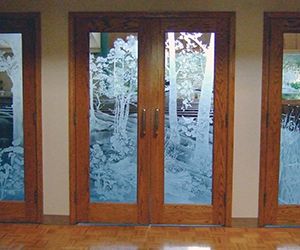 "Beauty in the Cycles of Life"

The set of 12 carved glass entry doors into the sanctuary form a wall 40 feet long that brings together the force of blown sand with the incandescence of light.

Nature’s phases of life, birth, death, and rebirth are stunningly revealed in Kathy Barnard’s 12 carved glass doors, “Beauty in the Cycles of Life,” at the Grace Covenant Presbyterian Church in Overland Park, Kansas. The set of entry doors form a wall 40 feet long that brings together the force of blown sand with the incandescence of light. The result is an entrancing, multi-layered vista featuring the flora and fauna of the rolling Kansas prairie.

The newly formed Grace Covenant congregation approached Barnard in the late 1980s as plans for a building began. Congregation members were familiar with Barnard’s etched glass and contacted her to discuss creating the doors. Upon meeting with her for many hours, the members decided to commission not only the set of 12 doors, but also four stained glass sanctuary windows incorporating the elements of air, earth, fire and water. Work proceeded on the two very different types of windows with the goal of creating an integrated theme rooted in nature’s beauty. 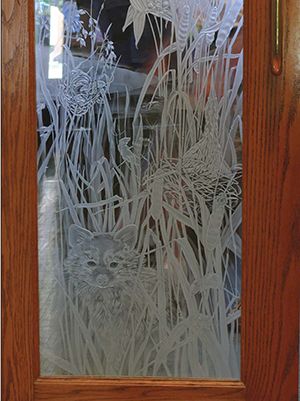 Concept for the etched panels

Barnard began her research for the span of carved doors with the church’s symbol, an acorn sprouting into an oak tree. With that genesis, her love and knowledge of nature took over.

Barnard began her research for the span of carved doors with the church’s symbol, an acorn sprouting into an oak tree. With that genesis, her love and knowledge of nature took over. An oak tree does not live alone but depends on and provides for an entire landscape, captured in the stretch of doors that separate the church’s entry from the sanctuary. The wall encompasses the creatures and plants that surround the growth, life cycle, and ultimately the decay of the oak tree’s terrain in the Kansas grasslands, where the church is located. The cyclical nature of the landscape is revealed in various examples. For instance, the bird sitting in the tree feeds on the plant that grows nearby. The wildflower under the oak tree shelters an animal. Although the concept for all 12 doors was designed at the onset, each door was carved, constructed, and installed as the church’s finances allowed. The project began in 1988 and was completed in 2006.

The span of doors is well-integrated into its setting, providing a division between the two spaces for entry and worship. Barnard’s art creates a focus for the church’s concourse, just as the building provides a fitting backdrop for her work. Barnard filled the etched panels at the sides of the landscape with heavily wooded scenery with its abundant creatures and activity. The center panels include open water and life at the water’s edge, allowing a clear view of the church’s sanctuary. The etched landscape reflects the building’s plentiful light and blends perfectly with the interior finishes of natural stone and wood.

Each door could stand alone as an individual work of art, but the six pairs come together to create a magnificent setting. As in nature, the scene is layered with details that gradually reveal themselves to the observer. Viewing the wall patiently allows light to catch the petal of a flower, a tiny animal or the shading of a hollow. The panorama begins with oak trees and a surrounding landscape in full foliage. Leafy branches laden with plump acorns shade the ground below. An owl roosts, having just caught a mouse for its dinner. Other mice and squirrels scurry away in the underbrush, escaping to safety. Tiny roots extend below ground from a dropped acorn. Rabbits browse for a meal, not far from butterflies and other insects. A broken branch and vegetation rest among native flowers, providing sustenance for mushrooms, beetles, and ferns. Even a rabbit’s underground burrow is revealed.

The central water scene begins with a prairie marsh, partially hiding a raccoon and a cluster of birds’ nests in a stand of blooming cattails. Dragonflies hover above the surface of the pond. In the open water, we can spy a water spider diving for a meal, several fish, a turtle poking his head out of the water, tadpoles and a frog narrowly escaping the beak of a hungry predator. As the water merges again with the landscape, the shore’s blossoms include cone flowers, foxtails, morning glories, and Queen Anne’s lace. A spider web shimmers among the tall grasses at water’s edge. 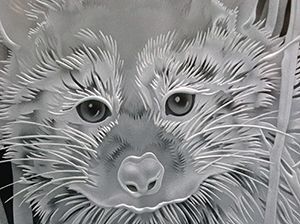 Barnard created an overall perspective for the scene by placing larger-than-life insects and animals at the base of each window in the foreground. A perhaps unintended outcome is that these details, placed at their eye level, especially attract the attention of the congregation’s children.

The scene culminates with a large, verdant tree, heavy with fruit. A serpent is twined within the branches of the tree, waiting patiently. Rabbits graze obliviously at the base among lettuces, wild grapes, and dragonflies. Leaves and fallen fruit at the tree’s base are just beginning to decay, providing nutrients for the next season of growth. Barnard created an overall perspective for the scene by placing larger-than-life insects and animals at the base of each window in the foreground. A perhaps unintended outcome is that these details, placed at their eye level, especially attract the attention of the congregation’s children.

Barnard began experimenting with glass while working at Hallmark Cards in Kansas City in the 1980s. The young artist, newly graduated from the University of Kansas with a degree in illustration and graphic design, found an unused sandblaster and tried her hand at etching and carving glass. She soon founded her own studio, refining her techniques for windows, doors, and glassware. Today her studio at 1605 Locust Street in Kansas City, Missouri, contains a customized booth for sandblasting. Her commissions have included carved multi-story windows and commemorative art glass pieces, as well as stained glass walls and windows.

Barnard’s ethereal creations evolve from a carving process that is nearly industrial. After transferring an original drawing to masking material on glass panels, she traces the illustrations with a knife. After she peels away sections of the design, she loads each panel onto a trolley and wheels it into the blasting booth. Barnard then dons protective gloves, goggles, and a respirator. Viewing her artwork through an adjustable window in the booth, she sprays silica carbide sand through a nozzle that varies between 20 and 140 pounds of pressure, from airbrush intensity to deep carving. She sprays the exposed areas and then peels another layer to spray again. Shadows form, wisps and tendrils are revealed, and a scene emerges to catch and hold the light.

Each member brings a different perspective to the artwork, notes Ky Weekly, former associate pastor. “The congregation is pleased to recognize the signed pieces, as well as celebrate them,” he says. He feels that the installation of Barnard’s final stained glass windows in the sanctuary help the congregation recognize the artwork of the doors.

While children often bring attention to the vast number of “critters” in the panels, each member seems to have a favorite bird, flower, or scene, he says. As for his personal favorite, Weekly states, “I’m really partial to owls, but I appreciate the, serpent too. The ants and lacewing are fun and have incredible detail. You have to do some exploration to find them."

Grace Covenant’s carved glass doors provide a metaphor that addresses the heart of its congregation. Just as the Kansas oak thrives on and supports the surrounding birds, plants, and animals, the congregation lives and grows stronger through connections. Some connections are plainly visible, while others are hidden in the shadows or deep within. What is below the surface — deep roots and inner growth — add strength to the forest as well as the congregation. Grace Covenant grew from a small group of worshipers into the large flock it is today, sheltering many groups and their activities – just as an acorn sprouts into a large, strong oak tree.